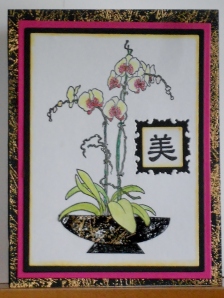 How long have you been stamping?
I lost count!  Maybe 10 years???

What is your favorite technique?
I love to color. I have various brands of watercolor pencils and water pens to blend them. This all stems from that box of 64 Crayola crayons with the built in sharpener I got as a kid. Give me a coloring book and crayons and I couldn’t be happier. (Well, I could be happier if a dog was laying next to me while I colored.)

What are your favorite colors to work with?
I gravitate towards pinks and greens but when I stamp Asian themes I go for bolder complementary colors. I did a challenge last year using analogous colors and I want to try more of that.

What are your favorite Asian stamp images?
Anything I can color, nature scenes, geisha, flowers.

Favorite stamping accessory? (Such as scissors, etc.)
The Fiskars cutter with the guide wire, since there are times I can’t even cut a straight line with a cutter!

What is the one tool you couldn’t live without?
A sharp pair of small scissors

Any helpful tips for the group?
If creating feeds your soul, try to make the time to create. I have not yet succeeded at this, but I’m trying!

As a member of OSA, why do you like stamping in the Oriental theme?
I have always been enamored of Asian art. I am drawn to its intricate simplicity. Whether an Asian brush painting or the vibrancy of a kimono, I find them inspiring.

What favorite stamping magazines would you recommend and why do you like them?
I don’t subscribe to any magazines. I browse OSA, Splitcoaststampers and Pinterest if I want to learn something. If I purchased magazines this would take time away from stamping.

Published in any magazines?  If yes, please list.
I’ve never submitted anything.

Any other hobbies, talents or craft interests?
I make jewelry, love to cook, garden and I am owned by 2 Jack Russell terriers who compete at trials.

What inspires you to be creative?
If I see a color combination that delights my eye, the ideas start tickling my brain.

Art background?
I took a drawing class in college, but that is about it.

Any favorite websites you would recommend for inspiration?
OSA, Splitcoaststampers and Pinterest (I forget that Hanko and About Art accents have galleries!)

Do you have a day job when you’re not stamping?
According to my dogs,  I am their personal valet, doorman, cookie dispenser, etc. They believe that during their waking hours I should be “on call” at the drop of a toy.

Tell us about your family and where you live.
I am married and have my fur kids. I grew up on Long Island, but I am happier in the quiet and slower pace of Connecticut.

FYI: When I leave a comment in an OSA album I am a1terriermom, I sign my cards philsmom, I may have an album lurking out there as bacismom. This was the result of my getting hacked, so I had to change user names and passwords. It has been brought to my attention that people didn’t know I was a1terriermom . 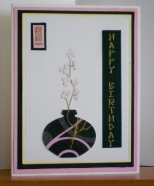 I recently learned of an art form called Kintsukuroi and I was also inspired by a Henry David Thoreau quote, “It’s not what you look at that matters, it’s what you see.” So inspired, I purchased Framelits Die Set 4 Pack with Stamps Frames by Graphic 45.

This is excerpted from Why the Word “Kintsukuroi” Means So Much To You:

“Kintsukuroi (keen-tsoo-koo-roy) is the Japanese art of repaired pottery.
But it’s something more than that. An important something.
When a potter makes a bowl, he makes it by hand with malleable clay.  The bowl is formed to the potter’s liking, then fired to a couple thousand degrees.  Afterwards, it is finished and presented as a true work of art.

Now, let’s say the bowl broke.  Would you even consider repairing it, let alone consider it more beautiful for having been broken?  Of course not!  We (especially in the Western world) demote and dishonor it, throwing it out in the trash.

But others would not only repair it, but also elevate it to a whole new level of appreciation.

The Origin of the Repaired-Ceramics Artform

We’ll have to go back to mid-1500 Japan for that.  The story is told of a bowl that was much loved by a military ruler. One day during a gathering, a servant accidentally dropped the bowl, which broke into five pieces.  Everyone paused, fearing for the young man as the military leader was known to possess a quick,  harsh temper.  Then one of the guests improvised a comic poem about the incident, provoking laughter all around and restoring the leader to good spirits.

This story goes on to say that instead of the break “…diminishing [the bowl’s] appeal, a new sense of its vitality and resilience raised appreciation to even greater heights.”  The bowl had become more beautiful for having been broken.  The true life of the bowl “…began the moment it was dropped…”

From that day onward, mended bowls have been used and cherished for generations.  In Japan, cracks in precious bowls are often filled with gold.  The Japanese believe that when something has suffered damage and has a history, it becomes more beautiful.”

My homage to kintsukuroi because it’s not what you look at that matters, it is what you see.

Directions:
1. On black base layer stamp in Brilliance Galaxy Gold, Stampabilities Scratchy Texture and emboss with Ranger Queen’s Gold embossing powder.
2. Cut pink layer.
3. Cut black layer.
4. On white layer, stamp Stampabilities Orchid Greetings in Versafine Onyx masking the pot. Emboss with clear embossing powder.
5. On a scrap piece of white cardstock stamp the leaves of the orchid plant and emboss with clear embossing powder.
6. After coloring cut out the leaves that would be obstructed by your cache pot.
7. Sponge Gold ink around perimeter of white cardstock.
8. Using an oval die cut out a cache pot in black and use a scrap for its base.
9. Mask some of the Scratchy Texture stamp and stamp on the cache pot in gold and emboss with Gold embossing powder.
10. Cover cache pot with Clear Glossy Accents.
11. Stamp in black and clear emboss on white your sentiment.
12. Cut aperture with Fleur de lis square for the sentiment.
13. Color image and layer the cardstock as you’d like.